Following in Ronaldinho’s footsteps, Richarlison: “When I retire, I’ll buy an island with lots of ladies”

Richarlison, a striker for Tottenham Hotspur and Brazil, has been frank in his discussions about his post-football plans.

Richarlison has pretty straightforward goals for his life after football, much like his well-known colleague Ronaldinho.

“I’m going to buy an island and stay there with a lot of women, like that photo of Ronaldinho”, Richarlison said in an interview. 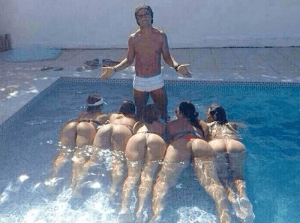 His phrasing has generated a good deal of controversy in Brazil. The striker is referring to the famous photo of Ronaldinho in a swimming pool in which he appeared with five women in thongs lying face down at the player’s feet.

In the interview, the Tottenham striker was asked by the journalist about what he planned to do when he retired from football and his answer, while laughing, has generated controversy because of the criticism that Ronaldinho’s photo caused.

The former Barcelona and AC Milan star assured that it was a joke with a friend. “It was all a joke in response to a friend,” Ronaldinho said.

“He sent me a photo showing how much fun he was having in Rio de Janeiro and I replied with that image. Unfortunately it then ended up on social media and as I am a public person, it generated a lot of controversy”.

Richarlison is one of the many forwards that has been picked by Tite to form part of the Brazil squad for the 2022 Qatar World Cup. It is not yet clear whether he will be a starter or not.