The best and worst of the World Cup last 16, the best eleven and the ‘MVP’

The Qatar 2022 World Cup entered its decisive phase. Spain, USA, Australia, Poland, Senegal, Japan, South Korea and Switzerland have said goodbye to the competition in the last 16, where the demonstration of power from Brazil, England, Portugal was seen… The prestigious Spanish sports “Marca” analyzes this round as follows.

You already know, it’s a classic line-up. Not all of them probably deserve it, but everyone who is deserves it. We also miss Bono, Ounahi, Vinicius, Neymar, Foden, Giroud, Depay, Perisic, Otávio, Joao Félix, Julián Álvarez…, but not everyone can be included. This is, diverse as almost always, the ideal formation of the last 16 of “Marca”. 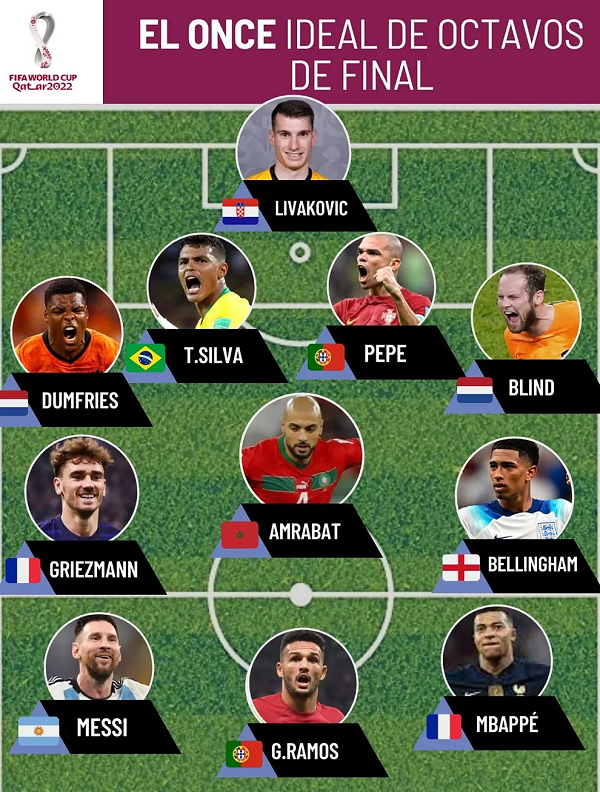 All eyes in the match Portugal-Switzerland (6-1) were on Cristiano Ronaldo, who started from the bench and consequently on his substitute, Gonçalo Ramos.

Benfica’s ‘9’ responded with three goals. He became the first player to score a hat-trick in his first game at a World Cup since Miroslav Klose with Germany in 2002. He also assisted Raphaël Guerreiro for a 4-0 lead. 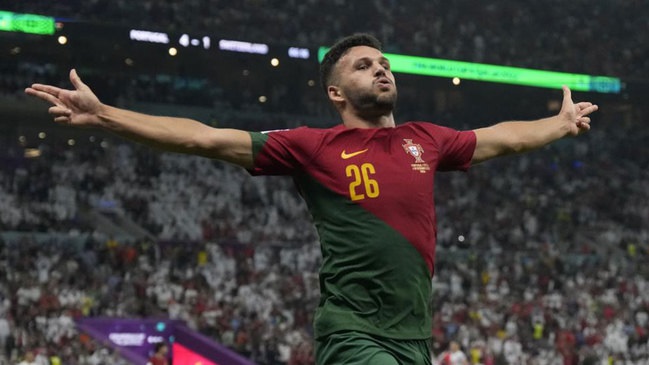 The Netherlands made it through the group stages without a splash…, but made up for it with a convincing 3-1 win over the USA in the round of 16. A triumph that took the form of Frenkie de Jong and above all, Memphis Depay, the author of the 1-0 lead.

Now, if something caught the eye of the oranges, it is the pistons in the wings that Louis van Gaal has. Denzel Dumfries and Daley Blind were involved in the three goals. Inter’s number 2 scored a goal and provided two assists, while the Ajax left-back/centre-back scored and provided an assist. 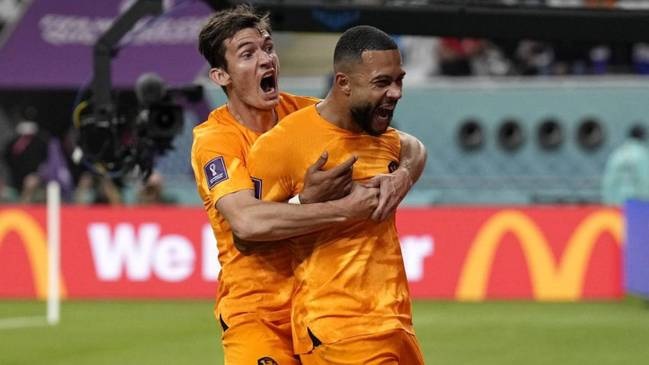 That 1/8 final was a jubilee match for Messi. Leo completed 1,000 professional matches: 778 with Barcelona, 53 with PSG and 169 with Argentina. Messi did not disappoint, in his best match so far in the World Cup he won against Australia (2-1). He unlocked the score (1-0) in 35′. This was his 788th professional goal. 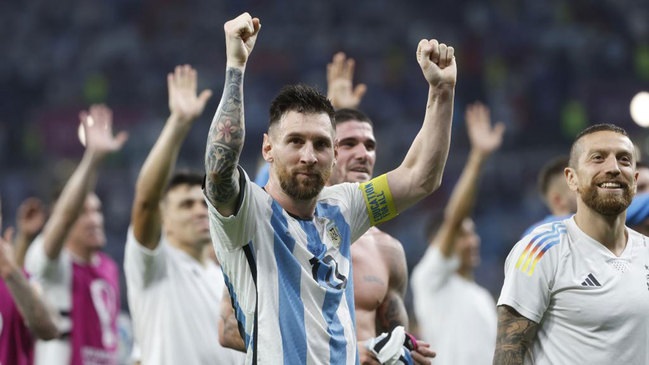 Dominik Livakovic, the hero of penalties

In Spain, they remember the great role of Bono…, the goalkeeper of Morocco who saved three penalties against the Iberians, but even better, if possible, was Dominik Livakovic. The goalkeeper of Dinamo Zagreb gave Croatia the qualification in the quarter-finals against Japan.

Livakovic took the baton from Subasic at Russia 2018 and saw off Minamino, Mitoma and Yoshida’s penalty kicks. Precisely, he saved three of the four penalties that were executed against his goal. Croatia has already entered the history of the World Cup. Only Ricardo (Portugal) and Subasic (Croatia) had conceded three penalties in a World Cup match. 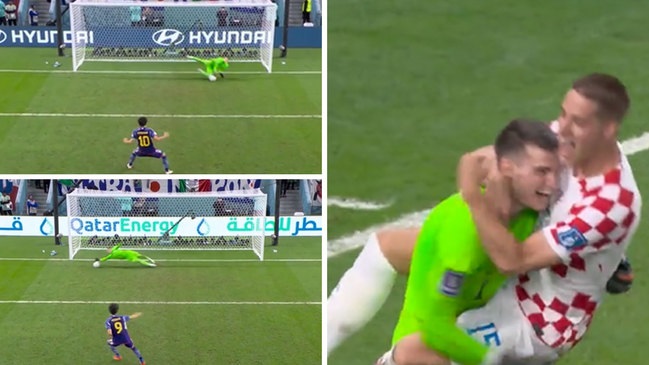 Mbappé for ‘MVP’ of the World Cup

Kylian Mbappé is, to paraphrase Luis Enrique’s ‘transmitter’, rampaging towards World Cup ‘MVP’. It looks like a man playing against children. He marches towards the “Golden Shoe” of this World Cup with 5 goals at the moment and has provided two assists. He made the difference again against Poland (3-1). He filtered the pass for Giroud to make it 1-0 and hit two posts, the cross and Szczesny’s perpendicular. The only way to stop him is with a foul. 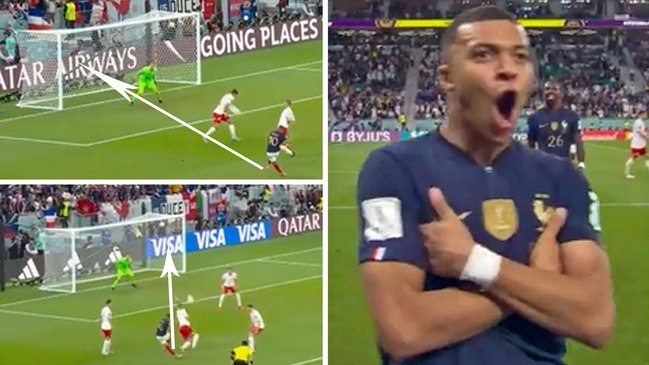 The disappointment was Spain

All the big favorites were heading towards the quarterfinals with more or less problems… until it was Spain’s turn. ‘Luchoneta’ was entangled in the ‘spider web’ that Walid Regragui wove and ended up falling to penalties. Sarabia hit the first post and Bono, immeasurable, received the next two shots from Soler and Busquets. 1019 passes and 76.77% possession provided a poor haul: one shot on goal in 120 minutes. 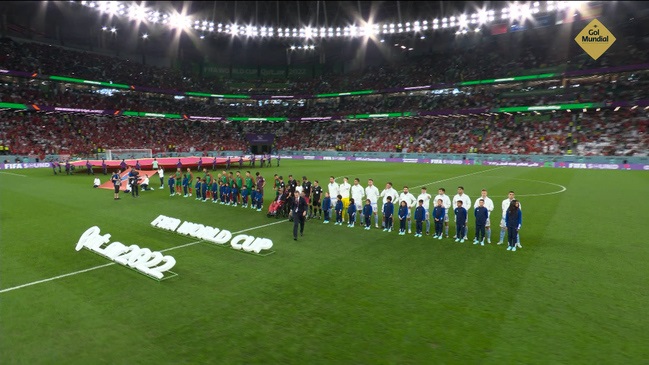 Brazil ‘danced’ (literally) against South Korea (4-1) with an unforgettable first half. In 36′, Tite’s team was winning 4-0 with goals from Vinicius, Neymar, Richarlison and Paquetá. Everyone celebrated to the rhythm of ‘samba’. They even tried to get Tite to dance.

Brazil’s barrage, which appeared almost every minute in front of the opposition goal, supports the status of the main contender for the title. The game was so ‘quiet’ that Tite had the luxury of activating Weverton for Alisson and fulfilling his promise: the 26 called up to “Qatar 2022” have already made their debut there. 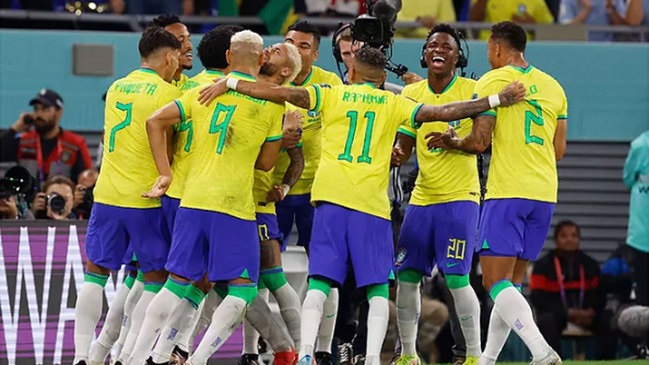