Cristiano Ronaldo has been named in the worst XI of the World Cup group stages – alongside four Qatar players. Ronaldo, 37, started every match for Portugal in their successful group stage campaign but struggled to make an impact, scoring only once and generally looking anonymous for large periods.

Sofascore, announcing their worst side of the initial phase of the World Cup, placed Ronaldo up front with an average rating of 6.37 across his three matches. He appeared a frustrated figure for much of his time on the pitch for Portugal, growing frustrated at team-mates for not shovelling him the ball more. His misery was compounded on Friday when he ducked at a corner, allowing the ball to deflect off his back and into the path of the grateful Kim Young-Gwon to fire home.

Sofascore’s own clarification is that only players who had played 60 per cent of minutes across the group phase were eligible, though it remains an unwanted gong for a player whose chief confidant in the media, Piers Morgan, declared was playing to achieve a move to a ‘Champions League club’ in Qatar.

Elsewhere in the side, Meshaal Barsham, who replaced Saad Al-Sheeb after Qatar’s opener with Ecuador, was the lowest rated goalkeeper, scoring an average of 6.10 for his two performances, in which he conceded five times.

Meanwhile, thanks largely in part to conceding seven in their opening game against Spain, the two centre-backs both hail from Costa Rica with Francisco Calvo and Oscar Duarte forming the partnership in the middle. They achieved average ratings of 6.25 and 6.30, respectively, such was the nature of their poor showing against the 2010 world champions. 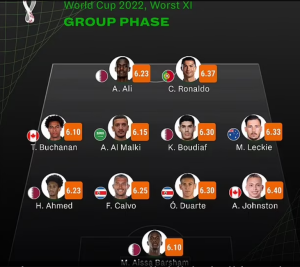