Canelo vs Messi: the funny web tool that will protect Leo from the Mexican boxer

After Saul ‘Canelo’ Alvarezmade a scandal on social networks due to the alleged kick given by Lionel Messi to a shirt of the Mexican team (after Argentina won 2-0). Memes, comments and jokes haven’t taken long to arrive.

But what Canelo surely did not expect is that a group of fans launched a website that will help Messi to know the distance between him and the Mexican boxer, to avoid meeting him.

Canelo threatened Messi after a video went viral in Argentina’s dressing room in which Messi has clothes lying on the floor while he is changing. Among the clothes is a Mexico jersey lying on the floor, and when Messi takes off one of his boots, he moves the Tri shirt, which Alvarez interpreted as disrespectful.

In response, Canelo, in a tweet that has now been deleted for violating Twitter rules, threatened Messi that if he finds him, the Argentine will be in a very bad way. 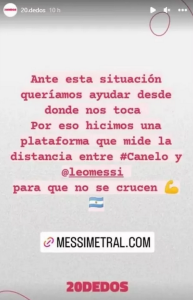 A couple of days after Canelo has been slammed in social media for his violent messages -not only against Messi but also against anyone who criticizes him-, in Argentina a group of fans found a fun and original solution so that both sportsmen do not cross paths: the Messimetral.

How does it work?

When you open the page (not available in app), Messimetral shows a map of the world with two locations: the place where Canelo Alvarez is and where Messi is.

The map calculates the distance in kilometers between both athletes and also has a “risk traffic light” that indicates the probability of both of them meeting. At the moment Messi is in Qatar and Canelo -supposedly- is in Zapopan, Jalisco, the distance between them is approximately 14,196 km, so the risk of crossing is low.

We’ll have to see how that data is updated after Argentina’s participation in the World Cup is over, but at least Messi can rest assured that Messimetral will help him avoid running into the very angry Mexican boxer. At least until Canelo cools down.

Such euphoria has been generated by the fight between Canelo and Messi that artist Mojahed Fudailat created the following animated short to make fun of the situation: